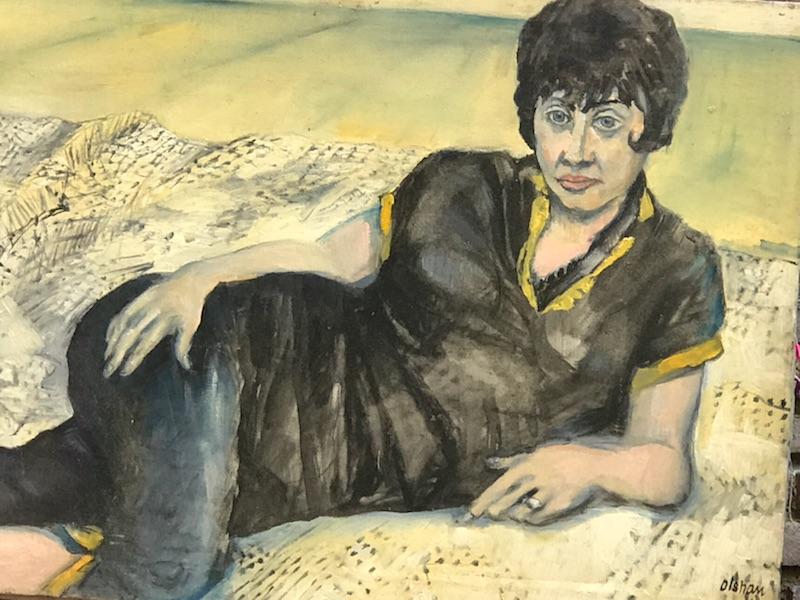 With a resounding sigh of relief, I am delighted to announce that my office renovation is nearly complete. The space you’re familiar with has been transformed into a comfortable and even more inviting dental home. And this office is indeed a home away from home for my staff and me—after all, we do spend more of our waking hours here than anywhere else, including our own homes.

Our newly remodeled abode is brighter and more contemporary, has a lot more treatment space, and sports some really cool state-of-the-art dental technology.

If you’ve ever lived through a home or office renovation, you know first hand how it always takes a bit longer (and costs a bit more) than initially anticipated.

But it was well worth it, and we love our new surroundings!

As the last of the contractors were completing their tasks, it struck me that our (now pristine) walls needed some aesthetic enhancement. They were begging for the kind of finishing touches that make a house a home. And that means—artwork.

What follows is a brief and heartfelt vignette about how I obtained the magnificent paintings that hang on our office walls today. And, how a decade’s long relationship with a gifted artist (coupled with serendipity) brought these masterpieces to my space and provided for a personally poignant moment in which the past caught up with the present.

The Story Of Bernie Olshan

Bernie Olshan was a widely recognized and respected artist who won accolades from his peers and numerous prestigious awards over the course of his 70-plus year career. His crowning achievement as a professional artist was in 1997 when he was elected to the National Academy of Design.

Bernie was as passionate as he was prolific. He was never without a pencil and sketchbook, ready to capture a random moment of inspiration. 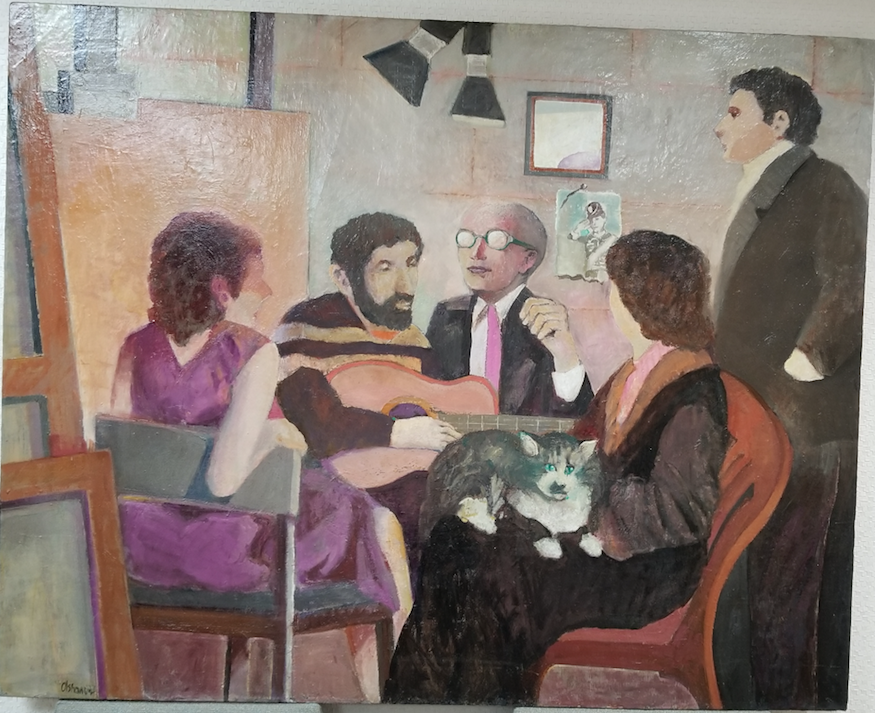 And, for 30 years I was Bernie’s dentist. I looked forward to seeing him every three months when he came in for his regular dental check-ups and periodontal care. In 2014 when he passed away at the age of 93, Bernie left behind his beloved wife Lyla, who was also my patient.

In fact, I first met Bernie and Lyla when I was just beginning my dental career in Forest Hills. Eleven years later, when I moved my practice into Manhattan, I was delighted that they followed me. Bernie and Lyla were among my first patients in NYC proper, and I can’t begin to express the heartfelt gratitude I felt for their support in my new venture. (I was blessed to have a core of loyal Forest Hills patients who were willing to schlep into the city. They helped sustain me during those first years—thank you all.)

It was at Bernie’s memorial service that I met his son, Aaron. Aaron, like his father, is a passionate working artist. Despite the sad circumstances, I was happy to finally meet the son I had heard so much about for such a long time.

Fast forward three years. Aaron appeared at my office in a state of panic. He was in the midst of a bonafide dental crisis. The day before, suffering extreme pain due to an abscessed front tooth, he had gone to a local emergency clinic where the offending tooth was removed. The attending dentist sadly informed him that, due to the condition of his mouth, most of his remaining teeth would likely have to come out, too.

(Before I go any further, you should know that I have all mentioned parties’ permission to share this tale.)

With the prospect of having all his teeth removed, Aaron was a state of panic. I examined him and discovered that he did need a great deal of dental care—and fast. Understandably, he was desperate.

As is the case with most artists, Aaron did not have the financial means to receive the care he needed. Out of my love and devotion to Bernie and Lyla, I decided to care for their son with the knowledge that he could not pay for my services. It was in some way my expression of loyalty to Lyla and to the memory of Bernie. I expected nothing in return.

My office renovations were nearly complete when Aaron’s dental work was finished. (By the way, I was able to save most of his teeth!) That’s when he invited me to come up to the Bronx and see his studio.

So, a couple of weekends ago, Ann (my wife) and I jumped on the subway and traveled up to the Bronx to meet Aaron at his quasi-basement art studio. 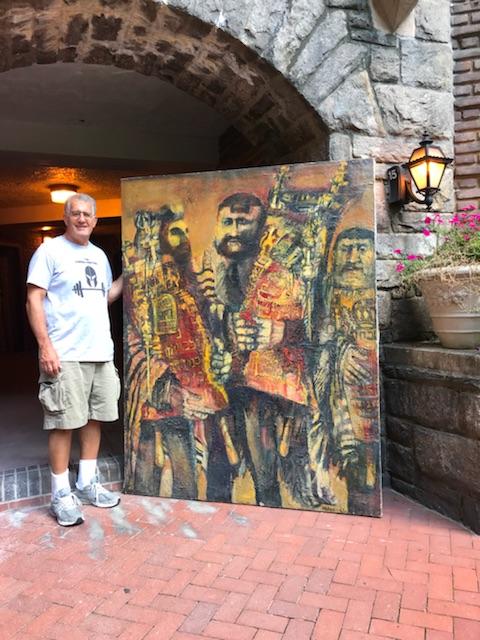 What we found there was astonishing.

Row after row of masterful paintings, leaned up against each other along concrete walls, collecting dust (and some mold). To me, they were crying out to be liberated from this dungeon so they could be viewed and admired in the light of day.

Aaron then said, “I invited you here so you could choose some pieces to hang in your office and your home.”

Our jaws dropped. Ann and I were simply overwhelmed. What a gift!

Then our challenge was how to choose just a few out of such an incredible treasure trove. However, we are now the proud owners of ten Olshan originals (a mix of both Bernie and Aaron’s work), five of which grace the walls of my office where staff and patients alike are admiring and enjoying them.

Two weeks ago Lyla came in for her quarterly appointment. As she was at the front desk having a chat with Sandra, she suddenly shouted in astonishment, “That’s me! That’s me!”

To her right was hung a painting of two women sitting on a sofa. It turns out that 53 years ago, she had posed for that painting. Then she noticed another painting by her beloved Bernie.

With eyes tearing, Lyla smiled from ear to ear.

It was a priceless moment where life emulated art and the past reached forward to the present. We felt as if Bernie was right there with us—and he was.

A few finishing touches are still needed before I can say that the office renovation is complete. But, I am thrilled and excited to welcome you to your new dental home. I invite you to enjoy its ambiance and to behold the creations of a very talented artist.

POSTSCRIPT:  Over the many years I have been in practice, I’ve met many wonderful single men and women who asked me if I knew any appropriately single and compatible individuals that might be a good fit for them. In other words, the idea of me serving as a matchmaker has come up more than a few occasions. (A personal introduction seems to be a better way to meet people than through an internet dating site.)

To date, I have not been invited to a wedding where I was the catalyst for such a pairing.

That said, I feel compelled to attempt my hand at finding appropriate homes for more of Bernie’s masterful creations. It disturbs me to think about his work being lost to a dumpster when Lyla and Aaron are no longer here to protect it.

So, I want to make a match: Bernie’s creations and a gallery, a collector, a museum…

I have no knowledge of how the art world operates, so I am asking for help or guidance.  I am willing to do the legwork. I will not claim any financial compensation. I just want Bernie’s beautiful paintings to be preserved for posterity, and if a few shekels find their way to Lyla, then I will feel like a successful a match-maker.