Every Picture Tells A Story

Behind the scenes at this year’s holiday photoshoot…

It’s that time of year again! The holidays are upon us, with Hannukah already here and Christmas just days away. We’ve been very busy here at 30 E. 40th St., stuffing envelopes with what has become our annual office tradition – our yearly holiday card.

I have lost count, but for what seems like a very long run, all of us in the office look forward to participating in a photographic expedition to shoot our holiday photo. Thus far, we have ventured to and posed at a number of notable, quintessential New York City locations such as Grand Central Terminal, Pershing Square, The New York Public Library, and the USS Intrepid. Each venue was carefully chosen to grace both the front and back of our annual holiday card, where we send good tidings to you, our extended dental family.

This year was no exception, but the story behind the scenes is a story in itself – and worth sharing.

The Story Of This Year’s Photoshoot

My wife, Ann, and I moved to the Upper West Side several years ago – and we love it. Riverside Park and the Hudson River are literally footsteps away. Better yet, it’s a quick downhill glide by bicycle to the edge of the Hudson and easy access to The Hudson River Greenway, a biking and walking byway that extends along the entire length of Manhattan on the west side.

I’ve spent many an evening pedaling along while the sun sets over the river. One can easily get lost in thought and momentarily forget that you’re even in the city until you glance to the East and behold the NYC skyline (or some guy on an electric scooter almost crashes into you). If you pedal downtown, you end up at Battery Park City and the Staten Island Ferry. Heading north (uptown), your trip ends at the foot of the George Washington Bridge and the home of The Little Red Lighthouse, which is the anointed setting for this year’s holiday card. That is, anointed by me in as much that no one on my office staff knew that there was a lighthouse on the Isle of Manhattan.

I decided a while back that The Little Red Lighthouse would provide a wonderful photo-op for this year’s holiday card. Whenever I visited the site, other people were there enjoying it, too. So, I figured there would be no problem getting the staff and all our accouterments there. Easy-peasy!

And so, it was arranged.

Finally, we stumbled upon street parking on 171st Street, a mere ten blocks from what I thought was the promised land. And so began a seemingly endless and undulating march up some of the steepest urban hills and valleys, if not the steepest, in New York City.

(Side note: did you know that the highest natural elevation in all of Manhattan is Fort Washington Ave. at 183rd Street? It’s 265 feet above sea level – vs. 62 feet in midtown. Who said Manhattan is flat?)

We crossed over a pedestrian footbridge and were on the other side of the Henry Hudson Parkway. From that vantage point, we could plainly see the base of the bridge and the sweet Little Red Lighthouse awaiting our arrival. I figured if we could see the lighthouse, we were almost there. But noooooo!

The way down was covered with leaves, hidden stones, and water-filled depressions. It was more like an old bridle path than a trail for we mere mortals. To make matters worse, everyone was carrying lots of stuff. I, for one, had to hobble with my cane in one hand (due to my bad knee), a battery pack in the other, and my Santa Claus outfit slung over one shoulder. A bitterly cold wind was blowing off the water and chilling us to the bone. Maira’s hands were turning white. In fact, all of Maira was turning white. And our newest assistant, Monique, was wearing high heels!

We made some progress, albeit slowly, when suddenly, we were confronted by signs obstructing the path: “Construction Ahead – Take A Detour” A detour? What detour?

Sensing a mutiny in the making, I scurried ahead to reconnoiter further down the trail and through the woods. As I hobbled over hill and dale, I was all too aware of my wary and weary teammates and the fact that the sun was soon to be making its descent. That’s when I spotted, through the trees, a work crew from the NYC Parks Department! They explained we would have to backtrack about ¼ of a mile, and there we’d find an underground passageway that comes out right near the lighthouse. They saved me!

O.K. I found my way back to the group and nervously gave them the bad news: we would have to backtrack. Instead of shouting, “No way, we’re leaving!” as I expected, they said, “We’ve come this far. Let’s do it!” So, we backtracked, found the passageway, and tentatively descended into what felt like the bowels of the earth. When we came out on the other side, lo and behold – there was the lighthouse!

It was getting dark, and the cold wind gusting off the water was now hitting us square in the face. We had no time to primp our hair or secure our props, but the scene I’d imagined was finally captured. And now, we share it with you. 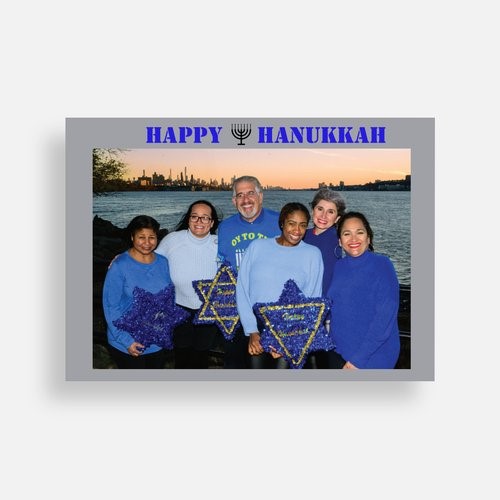 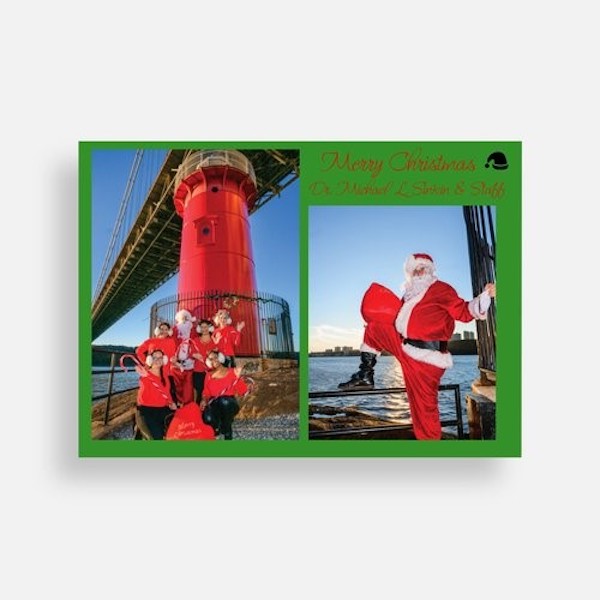 We all wish you great joy, good health, and no difficult journeys in 2023.

As Paul Harvey said, “Now you know the rest of the story.”

Find out more about the Little Red Lighthouse here.