A Missing Lateral Incisor, A Gap-Toothed Smile & The Tooth Fairy 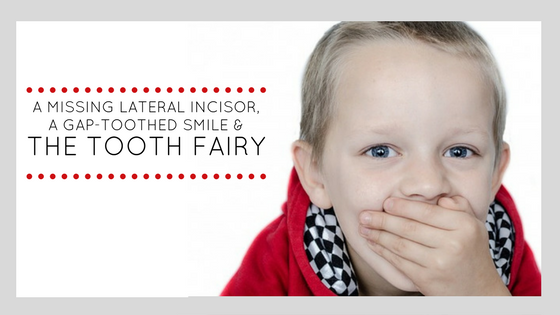 Not so long ago I welcomed a new patient named Willie to my practice. He is a really sweet and affable fellow who exudes the kind of warmth and easy-going manner that makes him a popular “guest” in our office. Willie has an engaging personality with a smile that begins with his eyes and works its way to his mouth – AND therein lies the problem.

From the time Willie was a boy he’s had a missing lateral incisor. That’s the tooth right next to the front tooth. 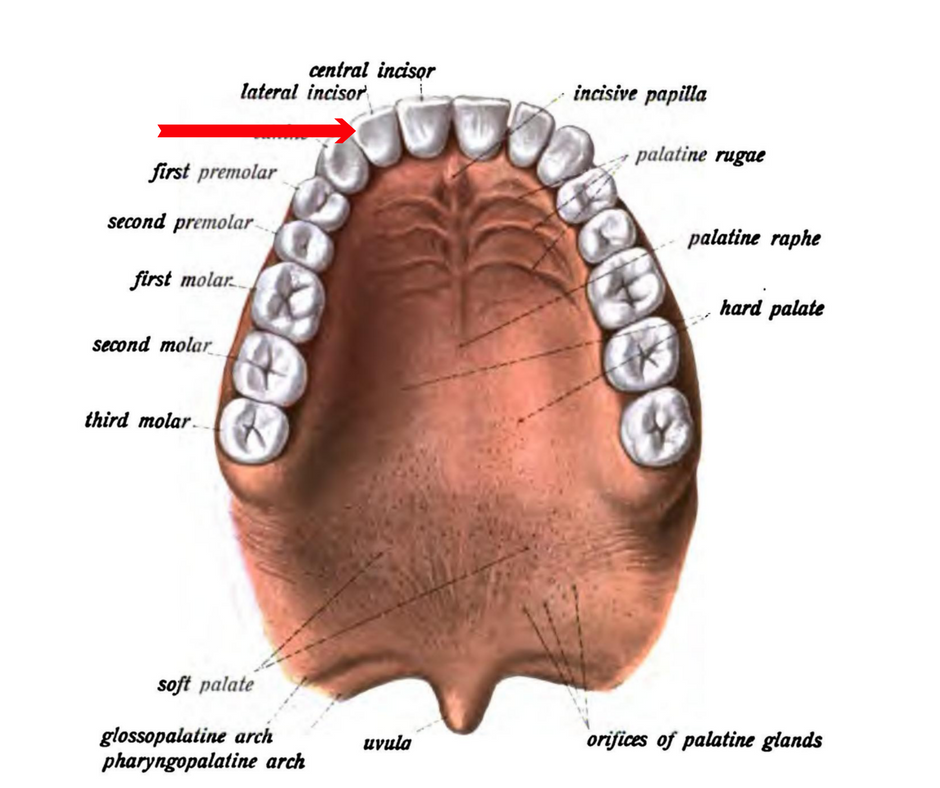 It wasn’t impacted like a wisdom tooth can be – trapped within boney walls hidden from the world to see. And it wasn’t knocked out during a bicycle mishap. Willie’s upper left lateral incisor never formed and when the baby tooth fell out, it left with a wide-open space.

A gap-toothed smile might be cute for a seven- or eight-year-old but not for a pre-teen. Willie had to deal with the teasing and the embarrassment brought on by the catty comments of his contemporaries (from the mouth of babes) that can instill in a developing personality a self-consciousness that, according to Willie, was his Achilles Heel.

Starting around the age of 12 Willie began wearing a removable “flipper” – similar to an orthodontic retainer with a tooth attached to replace the missing lateral incisor. And as innocent and benign as the term flipper may sound, it is, in fact, a removable partial denture. For 18 or 19 years it enabled him to interact socially and professionally without feeling like a “hillbilly” (his description).

Admittedly, Willie’s partial denture looked pretty darn good. But having a removable fake tooth from such a young age, and for so long, was a skeleton in his closet. Also he experienced periodic and never-at-a-good-time crises when the tooth broke off – leaving him again with a missing lateral incisor and a gap-toothed smile.

So ingrained in him is this sense of being incomplete that Willie, who enjoys the expression of body art, tattooed the image of tooth #10 – his missing lateral incisor, on his forearm: 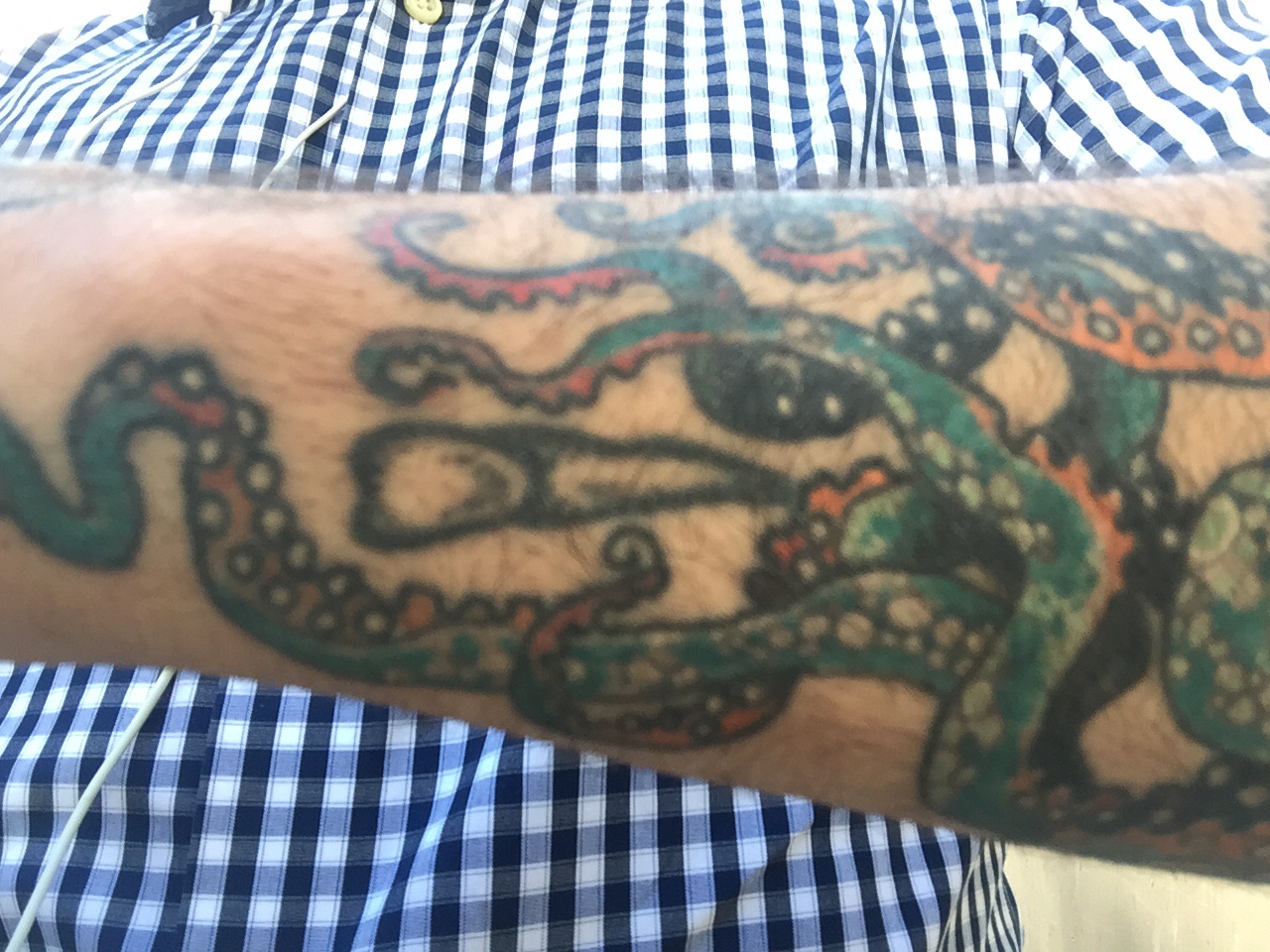 It was just before this past Thanksgiving that Willie’s wistful musings about getting a real tooth turned to a more serious conversation. He and I discussed the prospect of a dental implant, so he could finally vanquish his personal demon (his words, not mine).

After our discussion, Willie left my office with a script for a CT scan of his jaw in one hand and a bounce in his step. And while I advised him that we would probably need to build-up his bone, his excitement of the prospect of being “made whole” could not be quelled.

That is until we sat down to review the CT scan.

Willie’s tooth is congenitally missing and that means supporting bone never formed that is normally associated with a developing tooth. A bone graft was necessary before I could replace the missing lateral incisor with an implant. As I delivered the news I could see the glimmer in his eyes fade. Deflating disappointment. The cost of such extensive treatment was beyond his means at this time in his life. I offered significant professional courtesy, extended a payment plan, even created a staged treatment plan over a greater period time, but Willie was just launching his career and couldn’t swing it. Alas, he would have to wait.

We both felt the weight of his disappointment.

Then I had the inkling of an idea. As our consultation appointment ended I explained that while there are alternative treatments such as a bonded (Maryland) bridge, I believed there might be an affordable way to make what has become his personal quest a reality. As we parted I offered words of reassurance and promised to get right back to him after I explored my idea.

As many of you know, I serve as an adjunct associate professor in the Implant Program in the Department of Continuing Education at NYU College of Dentistry.  I approached the director, Dr. Trevor Bavar, and presented Willie’s case to him. “Might it be possible for Willie to be treated in our program?”

Due to the advanced nature of Willie’s bone deficiency he could not be treated by a participant but…I could personally perform the surgery along with one of the surgical directors (Dr. Kiwon Shin) as long as a student could participate in the case. (YES!!!!!)

I called Willie the following week and shared the news – the opportunity to have his treatment rendered at the school with my hands-on involvement and as he would be paying NYU fees directly to the school it was an opportunity to reap huge savings. He was overcome with joy. And he was about to head home for the holidays and he told me that I had just blown him away and made him so happy.

And he, in turn, made me so happy.

The old adage “It’s better to give than receive.” applies here. While his name was changed in this accounting of recent events, the facts are all true. And for me, the gratification of being a part of what feels like a fairy tale with a happy ending is beyond description.

Perhaps in Willie’s case the moon and the stars were aligned – and a little thinking out-of-the-box combined with the magic of a different kind of tooth fairy, came into play. Willie’s tooth fairy will soon be visiting to make a delivery instead of coming in for a pick-up, and the dreams of a gap-toothed boy will finally come true.

FOOTNOTE:  As of this writing Willie has had a bone graft using micro-surgical/tunneling techniques. He is healing and feeling pretty darn good and looking forward to having a “real tooth” replace his missing lateral incisor.