This is an article I was interviewed for on MSNBC.com. There has truly been an increase in my patients suffering with grinding since the beginning of the recession. Are you?

The foreclosures, the financial meltdowns, the freaky environmental disasters — they’ve all become part of our daily grind.

But for some, that’s not just a metaphor. 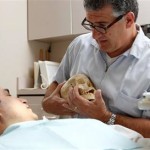 “I’ve gone several years without grinding but now it’s back,” says Betsy Riley, a 57-year-old program manager from Washington, D.C., who’s cracked five teeth and suffered a world of dental woes due to anxiety-provoked grinding. “All the stories about the economy, all the people who’ve lost their jobs. Plus every time you turn on the TV, there are mudslides, earthquakes, volcanoes.”

Grinding and clenching — otherwise known as bruxism — is indeed on the rise, say dentists across the country.

“I would absolutely say there’s been an uptick of about 20 percent in terms of the number of appliances or chipped teeth or things directly related to bruxism that I attribute to these stressful times,” says Manhattan dentist Dr. Michael Sinken. “I have a friend who has a practice that’s 90 percent TMJ. He says he’s absolutely seen an increase in business. People are hurting.”

Chewing over our problems

A recent study in the journal Head & Face Medicine found that sleep bruxism is more common with people who claimed to experience daily problems and trouble at work, a finding that hardly surprises former journalist Heather Draper.

“I was a business editor at a daily newspaper and had to cover the economy going into the crapper, at the same time realizing how bad it looked for my industry,” says the 46-year-old who now works as a nonprofit communications manager in Denver.

Looming layoffs and financial uncertainties (Draper was eventually laid off, forced to sell her house and take a job at a drastic pay cut) wore her down.

In turn, she wore her teeth down.

“I’ve done it for years — I have several crowns — but I’ve had a ton of anxiety in the last two years and it’s gotten worse,” she says.

Dr. Matthew Messina, a Cleveland-area dentist and consumer advisor for the American Dental Association, says his patients’ teeth are feeling the pressure, too.

“My office is close to a major NASA facility and when the Obama administration [made cutbacks], a large number of my patients worried about what that would mean for their future,” he says. “That led to a lot of stress and that led to grinding. We see it through headaches, joint pain, muscle pain and an increase in broken teeth, chipped teeth, broken old fillings, and fractured corners of teeth.”

According to the Academy of General Dentistry, about one in three people suffers from bruxism, particularly “people who are aggressive, competitive and hurried” (bruxism has also been linked to sleep apnea and as a side effect of certain antidepressants).

Unfortunately, many people who chew on their problems at night don’t know they’re doing it until they break a tooth. There are warning signs, though, including headaches, sore teeth, sore jaw muscles, flattened teeth, tooth sensitivity, ringing in the ears, and popping and clicking of the temporomandibular joint.

For those who sleep with a partner, there’s also that telltale creaking.

“My husband told me I was grinding again,” says Riley. “He can hear it at night.”

Figuring out you’re a grinder doesn’t necessarily cut the stress, though. Thanks to high cost of dental work – one crown can run from $500 to $3,000 — it sometimes just amps it up.

“You worry ‘If I go and do this how much is going to be?’” says Riley, who in the past two years has required two new crowns. “Just for laughs, I checked my dental insurance and they give you one dental night guard in a lifetime. When I was using night guards, I went through five in a space of two to three years.”