Having A Knee Replacement? Get Dental Clearance First! 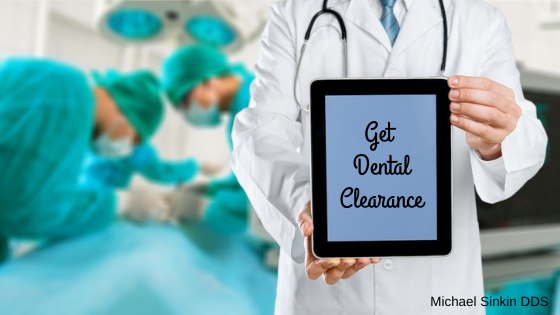 Why dental clearance is necessary before joint replacement surgery.

Just before his annual pilgrimage to Block Island for a two-week respite of summer fun and relaxation, my patient John came to my office for a routine dental visit (cleaning and examination). John is just about the nicest guy you could ever want to meet, and over the past 25 years that he’s been my patient, we’ve developed a very warm friendship.

At the beginning of our doctor/patient relationship, John and I logged many hours in my treatment room, which laid the groundwork for the personal as well as professional bond that we share today. After completing an extensive treatment program almost a quarter-century ago, John had enjoyed many years with a healthy and happy smile. Along the way, some dental challenges arose, including an occasional root canal and a fractured tooth, but I had been able to ameliorate each issue using rather conservative treatment methods.

Time marches on, and while John’s visits remained routine in nature over recent years, we both knew that the moment was fast approaching that the weakened state of his teeth would have to be addressed. The combination of normal wear and tear on a dentition that had already been compromised (remember John had needed extensive care when we first met 25 years ago) plus his powerful jaw muscles and weakened teeth set the stage for future dental intervention. So, when he came in for a cleaning the day before his annual summer getaway, John and I agreed that the time had come for us to have a face-to-face and discuss his treatment options soon as he returned.

Three weeks later, he arrived at my office, well-rested and with an incredible sun-drenched tan. We sat down and reviewed the scope of his treatment, including time and cost. None of it was a surprise to John. He was grateful that his teeth had served him so well over nearly a quarter of a century, and he was ready to start the treatment plan I recommended – so he could enjoy another quarter-century of good living with a healthy mouth.

To say I was alarmed at this revelation is an understatement. One of the issues in John’s mouth was a fractured tooth, which supported his permanent bridge. He had developed a severe infection, and pus was literally draining into his mouth. (It never ceases to amaze me how sometimes patients are not aware of serious problems brewing in their mouths. In John’s case, because his infection was draining, he had no pain.) I had put him on an antibiotic to keep the infection from getting worse. But what to do about his surgery?

When I explained he couldn’t possibly have the surgery while he still had an acute infection in his mouth, John literally lost his tan and turned ghostly white. The poor guy’s knee pain was so severe that he had not been able to sleep for months and was at the point where he could barely walk. In fact, he was so miserable that it was unimaginable to him that his surgery could be postponed.

An infection in your gums or teeth contains millions of harmful bacteria. These bacteria can easily find their way into your bloodstream and contaminate the boundary between your freshly cut bone and your new joint. This can lead to a severe infection in the surgery site.

Infection in the surgery site is extremely difficult to treat because replacement joints are made from non-porous materials such as metal, ceramic, and plastic. For antibiotics to fight infections, they must be carried through the bloodstream. Since no blood circulates through replacement joints, antibiotics can be ineffective in fighting such an infection.

If bacteria from an oral infection invades and contaminates your recent joint replacement surgical site, there are generally only two options to treat it. The first is for the surgeon to attempt to clean it out surgically. This is known as surgical debridement. The surgeon will remove the contaminated/infected tissue surrounding the new joint, wash it vigorously with antibiotics, and follow-up with aggressive antibiotic therapy. The success of such an intervention is less than assured.

The second option requires the surgeon to remove the new replacement joint, resolve the infection, and then re-do the surgery.

Knee replacements (as well as hip replacements) are as frequent today for the adult population as tonsillectomies were for children a generation or so ago. Such surgeries provide millions of people a new lease on life who suffer from immobilizing pain. Approximately one million such surgeries will be performed this year. That number is expected to grow to four million by 2030.

Back To John & His Knee Replacement Surgery

When the blood finally returned to John’s face, he agreed to come back the next day, so I could address his dental problem and clear-up his infection, thus enabling him to proceed with his surgery. However, the next day, he got caught up at the hospital with all his necessary pre-surgical tests, and he had to cancel the appointment.

At that point, I was so uneasy about the situation that I pleaded with John to come in and let me extract his infected tooth. Thankfully, he agreed. With a little juggling of our schedules, he came in the next day. I extracted his tooth and was able to follow up with him to ensure that the infection was gone.

Be Smart – Get Dental Clearance Before Knee Replacement Surgery

Most, if not all, orthopedic surgeons and hospitals require their patients to obtain dental clearance before surgery. Dental clearance is particularly critical before joint replacement surgery for the reasons I explained above. I was dismayed that I had not received a request from John’s surgical team for his dental clearance (and John was not forthcoming with the surgeon’s name lest the surgery be canceled). Curiously the request finally did come the day before his surgery.

Had his surgical team not been able to reach me, or if I hadn’t been able to resolve the problem, John’s surgery would have been canceled. Can you imagine the distress this would have caused him? Here is a man in severe pain, primed and ready for his knee replacement, only to be shut down the day before for something as routine as dental clearance. I did inform the surgeon about his condition and how I handled it.

Dental Clearance Is Necessary For Heart Valve Replacement Surgery, Too

The same story holds true for heart valve replacement surgery, which is also becoming more and more common. Replacement valves are either mechanical (no blood circulates) or made from tissue derived from human or animal donors. Blood does circulate through tissue valves, still, the point is – you don’t want to run the risk of a dental infection seeding a fresh surgical site with bacteria. Bacteria from a dental infection can contaminate a newly placed valve – with dire consequences.

It’s best to avoid a problem before there is a problem.

If knee replacement, hip replacement, or heart valve replacement surgery is in your future, you need dental clearance well in advance. Schedule an appointment with your dentist (me!) as soon as you and your orthopedist decide on a surgery date. You don’t want any surprises, delays, or complications because of a dental problem, right?

By the way, John’s mouth and knee are doing just fine!

(Afraid of the dentist? Don’t let Dental Phobia get in your way)

Michael Sinkin practices cosmetic, implant, and restorative dentistry in New York City. He is known for the wonderful care he provides to his patients, and for his wicked sense of humor! To contact Dr. Sinkin, click here.