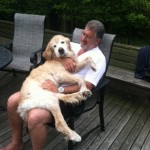 I can’t believe it’s been three years since we lost Willy. In honor of a great companion, I thought I’d post it again:

Last week, my golden retriever Willy turned 15½. Yeah I know, who counts half years? But when you’re an old dog (75-108 in human years) every month counts. Besides, aren’t babies’ ages counted in months until they turn two? And the truth of the matter is that someone just happened to ask me how old Willy was and I realized that it was his half birthday (it’s not like I circled May 22nd on the calendar).

Not surprisingly, what with Jonathan’s recent graduation from college, Ashley’s completion of her Masters in Occupational Therapy and entry into the workforce and our move into the city, I became nostalgic and cognizant of the fact that Willy has been an ever-present observer of the continuously unfolding story of Sinkin family life.

So, with all of our recent milestones, we couldn’t really ignore Willy’s 15 1/2 year old birthday. He had a steak dinner that night and I had the pleasure of taking him for innumerable walks thereafter (his digestive system doesn’t work like it use to). From the rambunctious young puppy that destroyed our kitchen and anything else he could sink his teeth into including shoes and cell phones to the mellow four legged “gentleman” that would allow children to sit on him and pull on his ears, Willy has been a part of our family for a long time. 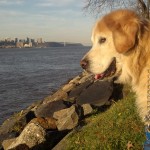 When we sold our house in Ardsley, Willy moved with Ann and I to Yonkers and slept right next to us; he on the floor and we on a Murphy bed that was practically on the floor. My poor wife Ann was sandwiched between Willy’s heavy breathing and my snoring – quite the symphony! When we finally moved into the city, Willy became an urban dweller and luxuriated in the aromas that enveloped every curb, fire hydrant, and street in Manhattan. I knew our apartment was “home” when I woke up one morning last week to find Jonathan, just home from college, sleeping on the living room couch with Willy by his side. (To read about Willy’s first jaunt in Riverside Park, click here)

My most meaningful Willy moments are the countless hours we spend playing fetch on the beach at Fire Island. Me hurling a stick (which was more like a tree limb) way out into the surf and Willy attacking the waves, head bobbing up and down in the peaks and valleys of the rushing tide, swimming…swimming…onward…‘til he gets to his prize and then finally turns to the beach and body-surfs ashore. Over the last eight years, Willy has developed quite the reputation as the quintessential beach dog and has been known to draw quite an audience when displaying his prowess in the high seas (so maybe I’m exaggerating a little, but he was out there on red flag days). You’ve seen the movie Jaws. When Willy takes to the ocean, think Paws. 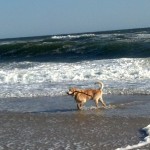 So, it’s Memorial Day Weekend 2012. We loaded up the car on Friday morning and headed out to Fire Island. Willy senses when we’re beach-bound. He gets all excited, tail wagging a mile-a-minute. No sign of his now severe arthritis or hip dysplasia, we get to the dock and he’s pulling on his leash to get to the ferry. We arrive at the house, drop off our stuff, grab a few sticks (always need a few extras because some invariably get washed away) and make a B-line to the ocean with our friends Elizabeth and Stella lagging behind.

Willy is galloping, albeit a bit unsteadily, up through the dunes to water’s edge. I launch the first stick (it was more like a gentle toss in the shallows). Willy retrieves it and prances about doing his little circle dance. I throw the stick again and again. Willy is in heaven. Two little children from the block watch Willy with glee. We continue our play for a good while and when Willy tires (something that never used to happen before my arm would begin to hurt from all that stick throwing), we return to the house. Will’s gait has slowed. Tail still wagging; we have to stop several times to rest. I give Willy a hot shower for two reasons: 1. It feels good. 2. Ann would kill me if he tracks in all that sand. Willy takes a drink and plops down tired yet content.

The next day, Willy is a bit lethargic. After all, he is 15 1/2 and is entitled to “feeling his age”. As the day moved on, Willy remained listless and I more than sensed that something was amiss. Except for the occasional walk and a few mouthfuls of chicken and steak, Willy slept all day. When Ann and I woke up Sunday morning, I knew Willy was gone. 15½ years old. He had his last hurrah in the place that he loved with his family nearby. We should all be so lucky.

Today is Monday, Memorial Day. I went to the beach this morning…alone. I threw one last stick in Willy’s memory.